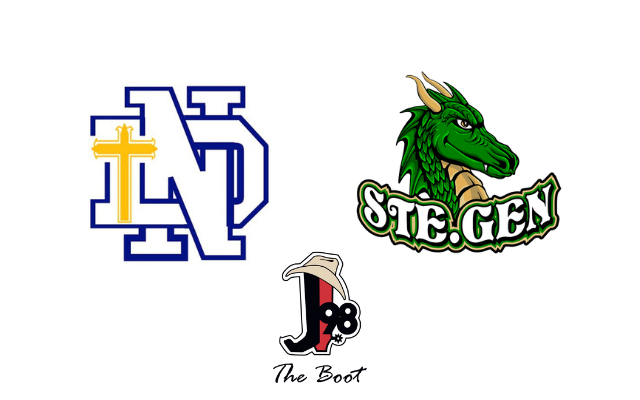 (Ste. Genevieve) Trailing two sets to one in the Class 3 state volleyball tournament Thursday night, the #2 ranked Ste. Genevieve Dragons stormed back to beat #6 Cape Notre Dame in five sets to advance to the state quarterfinals.

Ste. Gen again led early in the third set, but the Bulldogs of Cape Notre Dame took an 8-7 lead and never gave it up on their way to winning the set, 25-20.

Enter set four. Ste. Genevieve built a 12-6 lead, but Notre Dame turned around to take the lead back, 16-15. But Cape’s two tallest players, sisters Tori and Kate Ruble standing 6’1″ and 6’0″, respectively, came out of the game for a short period.

A string of points from Dru Koetting and this point by the Dragons were the key in a 10-4 rally.

It was a back-and-forth fifth set and seven lead changes had the set tied at 12 apiece. But the Dragons took the final three points to take the match.

Grass and Koetting were the Applebee’s of Farmington Players of the Game. Basler tells us what changed after the Dragons were down two sets to one.

It’s Ste. Gen’s first trip to the state quarterfinals since 2008 when they finished in 4th place. The Dragons improve to 31-4-2 and will play at Ursuline Academy on Saturday with a trip to the final four on the line.

Cape finishes their season with a record of 23-8-4.