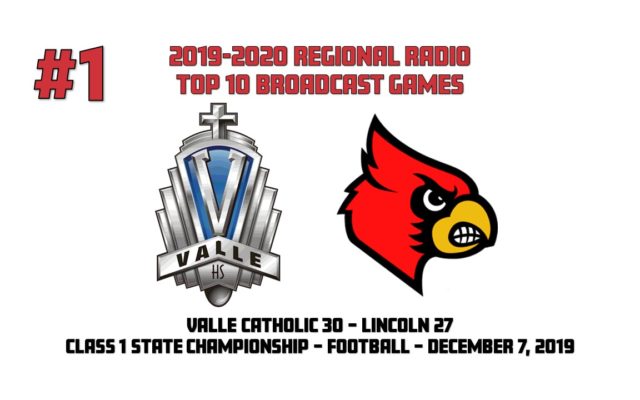 The #1 game is the Class 1 football state championship, where the Valle Catholic Warriors once again came out on top and defeated the Lincoln Cardinals 30-27.

Top-ranked and unbeaten Lincoln got the ball first at Farout Field in Columbia, and they didn’t waste much time getting on the board, getting down the field in 9 plays and 68 yards on the opening drive.

Valle Catholic found itself behind the chains when they got the ball for the first time, but senior quarterback Chase Dunlap completed a clutch 13-yard pass to Drew Bauman on third down.
That sparked the Warriors to their own solid first drive, scoring in 9 plays and 67 yards even when they fell behind the sticks again.
After forcing a punt, the Warriors got Bauman involved again.
The big trick play set up a shot for Valle to take the lead.
Up a touchdown at the start of the second quarter and fresh off forcing another Lincoln punt, both the offense and the defense seemed to be settling in for Valle Catholic.
But the Cardinals got a fourth-down stop and rode all-state quarterback Jackson Beaman when backed up on 3rd down.
And 3 plays later, Beaman finished off the drive.
With the game tied at 14, Lincoln started to make impact plays on defense as well, breaking up a deep pass intended for Aiden Heberlie before taking the football right back from Dunlap.
And the Cardinals kept making plays on 4th down.
The big plays set up Beaman to put the Cards ahead heading into halftime.
Despite being down 21-14 at the break, Valle played like true Warriors in the second half, starting the third quarter with a big play from senior Collin Grass.
It only took a few more plays for the Warriors to level the game.
The defense got a 3-and-out, and Valle Catholic used the power run game to set up a third down inside the Lincoln 5-yard line.
The Warrior defense held strong and made a 6-point lead stand up as the game reached the fourth quarter.
What followed was the stuff of legend.
After a long Lincoln drive came up empty as the third quarter expired, Valle got the football back and refused to give it back.
Despite running a whopping 16 plays for 81 yards and eating an impressive 9-plus minutes off the clock, the Warriors needed one more big play.
They got it from the right foot of junior Kolten Naeger.
The field goal to go up by 2 possessions meant, despite Lincoln scoring one more touchdown, they would fall short after failing to recover an ensuing onside kick.
The win matched Webb City for the most football state championships in Missouri history.
Dunlap finished with 190 yards passing and 96 yards rushing in his final game as the Valle signal-caller.
Bauman finished with a team-high 4 pass receptions for 63 yards and was named Applebee’s Player of the Game.
The Warriors finished 14-1 and had 4 players make the Regional Radio Dream Team in Dunlap, Heberlie, Grass and senior lineman Kyle Roth, who was later named the Class 1 State Defensive Player of the Year.
Full Game Audio – #1 Valle Catholic 30 vs. Lincoln 27:
Connect With Us Listen To Us On