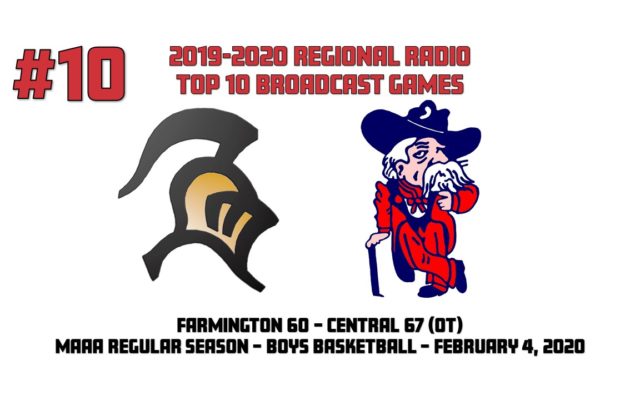 (Park Hills, Mo.) In the Regional Radio listening area, few cross-town rivalries compare to that of the Farmington Knights and the Central Rebels.

Checking in at #10 on our Top 10 Broadcast Games countdown is the boys basketball matchup between the Knights and Rebels at the T.J. Foulon Fieldhouse back on February 4, 2020, where Central came out on top in an epic back-and-forth game by a final score of 67-60 in overtime.

It was a tightly contested first half with the score 26-24 at the break.

The Rebels led the entire third quarter, but never by more than four points, as the Knights tied the game five times.

Then at the buzzer, Farmington took its first lead in the second half thanks to a wild shot by Isaiah Robinson.

The game continued to seesaw with multiple lead changes in the fourth, but the Knights started to pull away late as it looked like they may steal a win against the Rebels.

Central refused to be denied however as Brent Wagner hit the game-tying shot a minute later.

Farmington bled down the clock before turning it over in paint, and then Central failed to get off a shot with just a few ticks remaining in regulation to send the game into overtime.

Before the start of overtime, Rebels senior Breven McMullen says head coach Allen Davis’ message to the team was whoever wants it more is going to win.

As overtime began, McMullen started to take over for the Rebels.

With Central up by five, both teams continued to trade blows as back-to-back threes for each team kept the pandemonium rolling.

As the overtime period wound down to 30 seconds remaining and the Rebels still on top by five, a big defensive play by McMullen put an end to the Knights hopes of an upset victory on the road.

McMullen says with such little time remaining in the game, his goal was not to foul to stop the clock.

So finally after wild sequences galore throughout the game it was the Rebels holding on for the 67-60 win at home.

After the game, Central head coach Allen Davis said he was proud of his team’s ability to handle the adversity.

For the Rebels, McMullen finished the game with 20 points, Wagner had 12, and freshman point guard Mason Williams was named the Applebee’s of Farmington Player of the Game.

For the Knights, Robinson finished the game with 15 points, Jonah Burgess has 11, and Brant Gray and Cole Ruble had 10 each.

Central and Farmington went on to matchup two more times with the Rebels winning both the matchup in the MAAA Conference Tournament 69-64 and the Class 4 District 2 semifinal matchup 55-47.