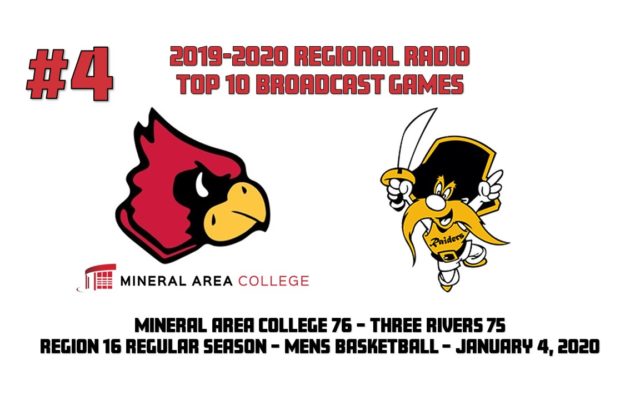 (Park Hills, Mo.) The game of the year for the Mineral Area College men’s basketball team came in their Region 16 opener on January 4th at home against rival Three Rivers.

How competitive was this game? The largest lead was seven points and the entire game was played within an 11 point margin. There were 14 lead changes in the second half alone. Tristian Mullins stroked a three midway through the first half to put MAC ahead 28-21.

Three Rivers reeled the Cardinals back in and early in the second half North County sniper Hayden Sprenkel showed off his skills to give the Raiders the lead.

After that neither team ever led by more than four points. Unfortunately it was Three Rivers that found that margin with less than a minute left.

Down two at the 28 second mark Malevy Leons missed an open three in the right corner.

Three Rivers hit their next two free throws and the cardinals still trailed by four with 20 seconds left.

The Cardinals then had to foul and hope. MAC fouled Lydell Jefford, a 75 percent three throw shooter who had gone four for four at the line in the game. He missed them both setting the stage for the thrilling finish.

Leons takes us through the play.

In this game decided by a razor thin margin both teams made the same number of threes, Three Rivers made one more free throw and the Cardinals made one more two point field goal.

Coach Luke Strege says it’s one of the most exciting games he’s been a part of.

Strege talks about the impact the win had on the season.

The 7th ranked Cardinals improved to 18-0 during a 30-2 season that saw them ranked as highly as third in the country.