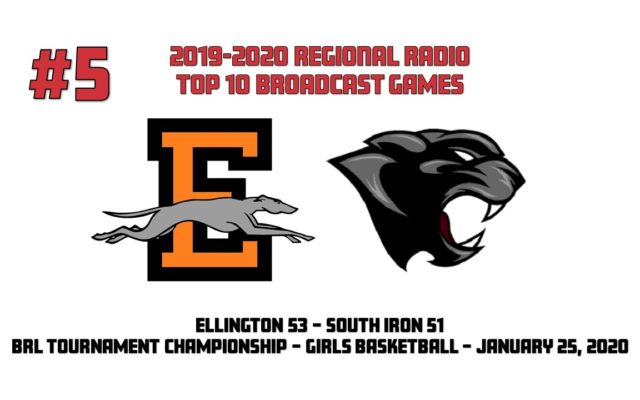 (Piedmont, Mo.) When you think of epic basketball games, there’s sure to be a few games that come to mind. #5 on our Regional Radio Top 10 Broadcast Games countdown can be added to that list.

The Black River League championship between the South Iron Lady Panthers and the Ellington Lady Whippets was sure to be a good one. They had already faced each other earlier in the season in Annapolis with South Iron protecting their home court by just three points 35-32.

The Lady Whippets would get revenge with a two-point victory of their own 53-51 to win the Black River League championship.

However, as the game in Piedmont got underway, it sure seemed like South Iron was going to run away with it.

Although Gore was torching the nets in the Tiger Cage, South Iron still enjoyed a seven-point advantage. As the clock ticked down to halftime, Madison Ayers put even more pressure on Ellington.

South Iron would jog to the locker room with a nine-point halftime lead. Head coach of the Lady Whippets, Paula King, says her team’s first half performance was eerily similar to the first time these two teams met. Coach King said the key to the second half was to be aggressive.

Ellington struck first in the third with more aggression and then found themselves within five after a bucket by Tyler Conkright.

The Lady Whippets run wasn’t over either. Kaylee King, a freshman for Ellington and also their best player who averaged 20 points a game this season, had zero in the first half. She was able to do other things well as the point guard for her squad, but when her number was called she stepped up and delivered in the clutch.

Ellington would take their first lead of the game with a bucket to open the fourth quarter and if you thought this game was already bonkers….well, you better buckle your boot straps for this next minute and twenty seconds.

South Iron was back up by three after a couple of good free throws from Madison Ayers with under two minutes to play, but Ellington would not go down without a fight.

With the game tied up, South Iron was unable to retake the lead after a missed shot. Ellington would corral the rebound and call a timeout with just over a minute to play.

After the timeout, Gretchen Hackworth did indeed have something, and she made the best of it.

South Iron couldn’t convert on the offensive end as Ellington got their revenge with a 53-51 victory and a Black River League championship title. After the game Whippets’ head coach, Paula King, said she’s glad they could get this one.

Ellington would finish their season with a record of 21-5 and runner up finish in the Class 2 District 2 title game. South Iron won their district and made their second final four appearance in school history as they finished with a record of 25-5.