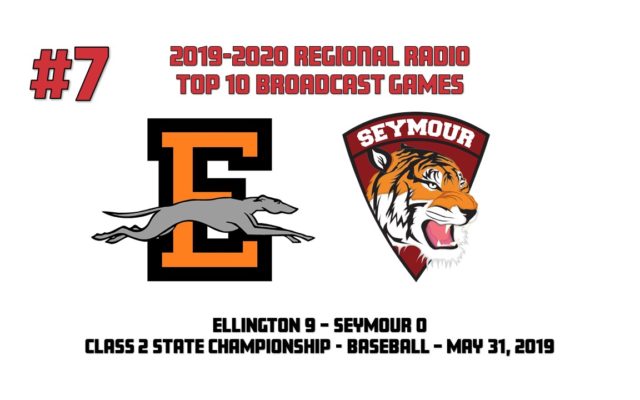 (Ellington, Mo.) A first in school history in sports is always a monumental moment, but none are perhaps bigger than bringing home a school’s first ever state championship.

Checking in at number 7 on our Top 10 Broadcast Games countdown is the Class 2 Baseball State Championship that saw the Ellington Whippets defeat the Seymour Tigers by a final score of 9-0 back on May 31st, 2019.

While the score finished lopsided, it was tightly contested for a majority of the game.

Then Ellington’s offense started to heat up with back-to-back singles to kick off the inning, followed by an RBI base hit by Kaleb Richards.

An intentional walk to Brewer loaded the bases with nobody out for Dilon Buckner and he delivered.

A wild pitch two batters later pushed across the fourth run of the inning as the Whippets moved out in front 5-0.

The offense kept rolling for Ellington late in the game. In the top of the sixth with two outs and a runner on second, Richards drove home another.

In the top of the seventh, a wild pitch scored the final run of the game for Ellington to make it 9-0.

Then it was up to Richards to finish off what was a sensational performance from the senior hurler.

With two outs in the bottom of the seventh, Brewer came out to the mound from behind home plate to talk with his pitcher.

Richards tells us what was said.

Here’s the final out.

After the game, Whippets head coach Jake Hime said bringing home a state championship to the city of Ellington was a dream come true.

Dilon Buckner was named the Applebee’s of Farmington Player of the Game after going 1-for-2 with two RBI, two walks, seven fielding assists and two putouts.

Richards was electric throughout on the mound tossing a complete game shutout with seven strikeouts and in the batters box going 2-for-3 with two RBI, two runs scored, and a walk.

The Whippets finished the 2019 season with an overall record of 29-1.