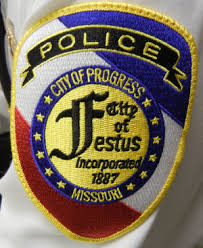 (Festus) The Festus Police Department recently awarded one of its members the medal of valor. Festus Police Chief Tim Lewis says they awarded Detective Sergeant Lewis Pippen for his actions during an incident in 2018.

Chief Lewis says the main reason they waited to award Pippen was that they didn’t want to interfere with the investigation, and for a time they were unable to order a medal until recently. Pippen was awarded his medal of valor during the Festus City Council meeting on December 13th.