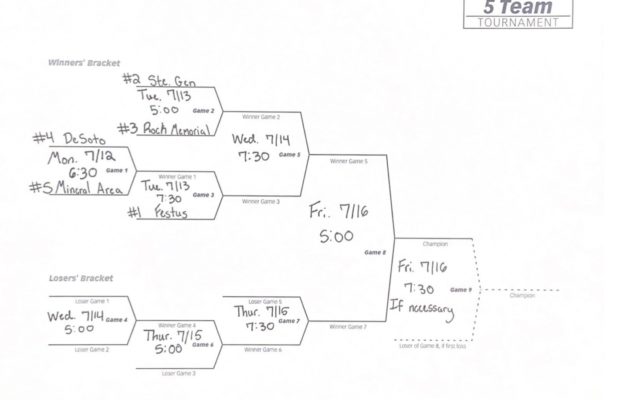 (Ste. Genevieve) The American Legion District 13 tournament is off and running, with Ste. Genevieve Post 150 and Festus Post 253 coming out the big winners Tuesday night on Regional Radio.

In game one, Ste. Genevieve knocked off Rock Memorial 11-1 in 5 innings.

Ste. Gen took an early lead with a two-RBI double from Austin Burnett in the bottom of the first.

Post 150 had an eight run lead in the bottom of the fifth with a chance to run-rule Rock Memorial when Keaton Boyer stepped up to the plate.

The second game of the night saw Festus #253 pull away late to beat the Mineral Area Raiders 8-3.

Festus flashed some serious leather early to keep the boys from Bonne Terre off the board.

The game was tightly-contested and all tied up until a big 2-out rally for 253 in the bottom of the fifth.

Laine Axtetter and Cole Myers had 2 hits each, combining to lead the Festus lineup with 3 runs scored and 3 runs batted in.

Ste. Genevieve and Festus will meet up in the winner’s bracket Wednesday evening starting around 7:30 on AM 800 KREI and AM 1400 KJFF.

Meanwhile, Rock Memorial battles to keep their season alive when they face DeSoto SMCI in an elimination game Wednesday.