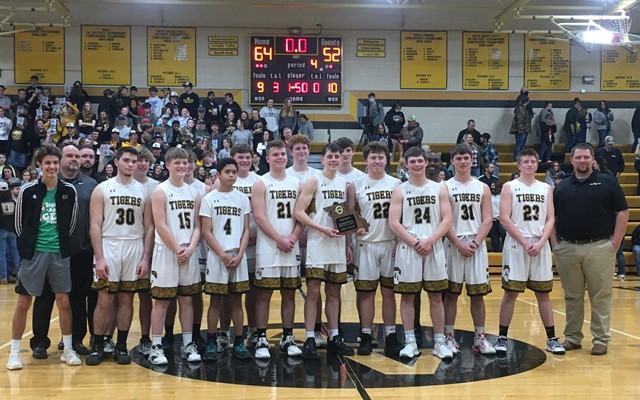 (Ironton) The Arcadia Valley boys basketball team earned their first district championship since 2010 with a 64-52 win over Kingston tonight in the Class 3 District 3 title game on J98.

The Tigers jumped out to a double-digit lead at the end of the first quarter and continued to build on that lead in the second.

Andrew Tedford caught fire from distance in the first half and sent AV into the locker room with all the momentum.

Tedford was named the Applebee’s of Farmington Player of the Game as he finished with 18 and four three-pointers.

Arcadia Valley took that 24-point lead into the break as they led 43-19 at halftime.

Kingston continued to scrap and tightened the game up down the stretch but ultimately came up short.

With a victory in sight and the clock winding down, here is what it sounded like from Ironton as the Tigers claimed the district crown.

Arcadia Valley head coach Eric Thompson says it was a great win, but their work is not done yet.

The Tigers improve to (10-8) on the year and will now take on Lift for Life (9-11) in the Class 3 Sectionals on Tuesday with the location of the game still to be determined.