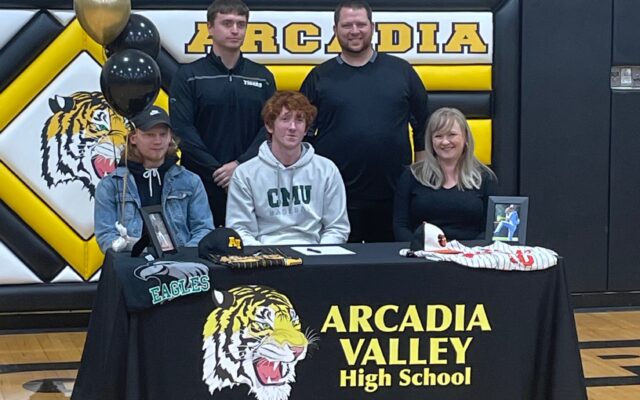 (Iron County) Arcadia Valley senior Keagan Lawlor signed a National Letter of Intent to continue play baseball at Central Methodist University, an NAIA program in Fayette, Missouri. He tells us how it felt to make his commitment official.

Lawlor earned second-team all-conference honors last season as a pitcher and catcher. He tells us why he chose CMU and how the Eagles plan to utilize his skills.

Lawlor went 5-0 with a 4.33 ERA on the mound last season. He says his fastball is his best pitch.

Lawlor says his favorite memory from high school baseball was playing at the Mickey Mantle Classic in Commerce, Oklahoma last spring where he was named to the all-tournament team.

Lawlor signed his NLI in the high school gymnasium that is lined with banners of past champions and the names of the players on those teams. He wants to leave Arcadia Valley with his name among those that came before him.

Arcadia Valley will begin the 2022 season against South Iron on March 19th.