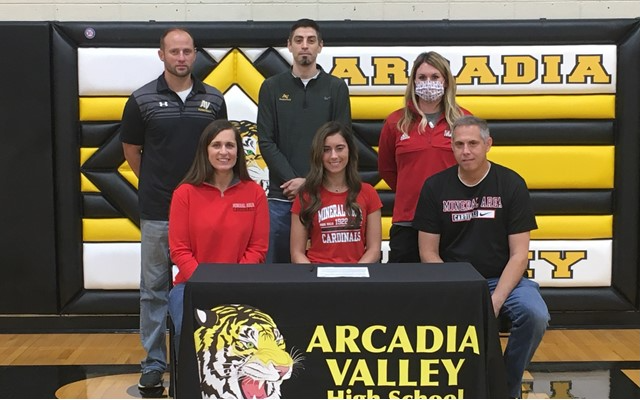 (Ironton) One of the area’s best girls basketball players has made her decision on where she will continue her career as Arcadia Valley’s Gracee Smith signed Friday morning with the Mineral Area College Cardinals.

A lifelong fan of the MAC women’s basketball team, Smith says once she was offered she knew that was where she was meant to be.

Smith has garnered a laundry list of accolades in her time as an athlete at Arcadia Valley.

Through her first three seasons playing basketball for the Tigers, she has scored over 1500 points, earned 1st Team All-Conference twice, 1st Team All-District twice, and was selected by area coaches to the Regional Radio Dream Team twice.

This past season she averaged 25 points per game, 5.7 rebounds, and 2 assists.

As gifted of a basketball player as Smith is, she’s equally capable on the volleyball court.

As a member of the AV volleyball team, she earned two 1st Team All-Conference and two 2nd Team All-District selections.

Smith says that being recognized as one of the school’s top athletes has meant a lot.

MAC women’s basketball head coach Briley Palmer says it was an easy decision to bring Smith onto the team because of her tremendous talent and love for the program.

Smith joins a MAC women’s basketball team that went 20-10 in the 2019-2020 season and reached the NJCAA Regional 16 Semifinals.