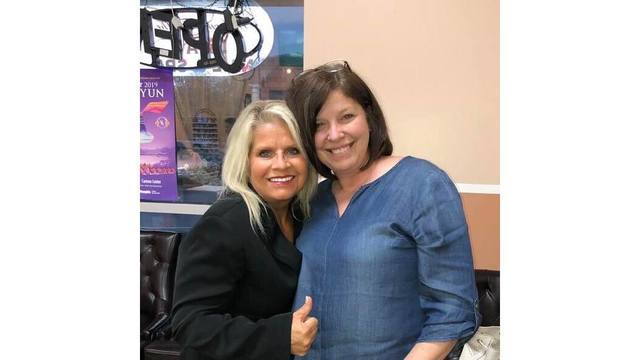 Prosecutors say while Rebecca Lynn O’Donnell (pictured above, right, in a file photo with Collins) has been incarcerated in the Jackson County Jail, she had numerous conversations with other inmates, trying to arrange the murders of multiple people.

The information in the affidavit of arrest says O’Donnell solicited other inmates to kill Linda Collins’ ex-husband and former circuit judge, Phil Smith, and his new wife, Mary Smith.

Witnesses say in the court record that O’Donnell allegedly wanted the murder of Phil Smith to look like a suicide and even wrote a suicide note to be used in his murder. She then wanted Mary Smith killed and wanted the assassin to pack a travel bag to make it look like Mary Smith was leaving Phil, the affidavit stated.

The court documents say O’Donnell told the inmates that the payment for these two murders would be gold and silver that Smith allegedly kept in his home — which O’Donnell said was valued at between $20,000 and $30,000.

O’Donnell also asked the inmates to murder the Prosecuting Attorney for the 3rd Judicial District, Henry Boyce, according to the affidavit. Boyce has been taken off O’Donnell’s murder case at his request, not publicly giving a reason for the move. Boyce was replaced by Robert Dittrich to handle the prosecution of O’Donnell.

The court record said O’Donnell let it be known that whoever helped her would be rewarded. O’Donnell solicited three inmates to do the killings and also asked another inmate to have that inmate’s boyfriend commit some of the murders O’Donnell had planned, the record said.

The last two counts were the result of O’Donnell soliciting two of the inmates to go to the Randolph County Jail in Pocahontas, where her vehicle, a 2005 Honda Civic, is being held as evidence, and “blow it up,” the court documents note.

O’Donnell supposedly told one inmate that the “police had planted stuff” in the vehicle’s trunk, and she wanted that “stuff” to disappear, the affidavit said.