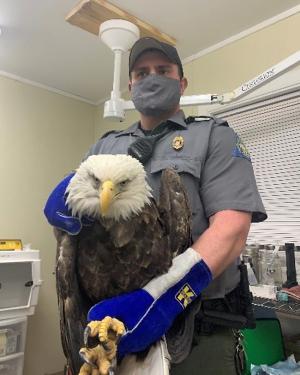 (Palmer) An investigation is underway by the Missouri Department of Conservation after an injured bald eagle was found in Washington County at the intersection of Highways ‘C’ and ‘Z’ near the Palmer area on February 5th.

Hall says during a close investigation of the bird, that’s when they found the bald eagle had been shot.

And Hall wants to thank Viburnum Chief of Police Hershel Shipman and he also some advice for the person responsible for this now dead bald eagle.

The American Bald Eagle is a protected species under federal law and shooting one is both a State of Missouri violation and federal offense.

If you know of the person responsible, Hall wants you to call the Operation Game Thief Hotline at 800-392-1111.

You will remain anonymous and will be eligible for a cash reward if the tip leads to an arrest.