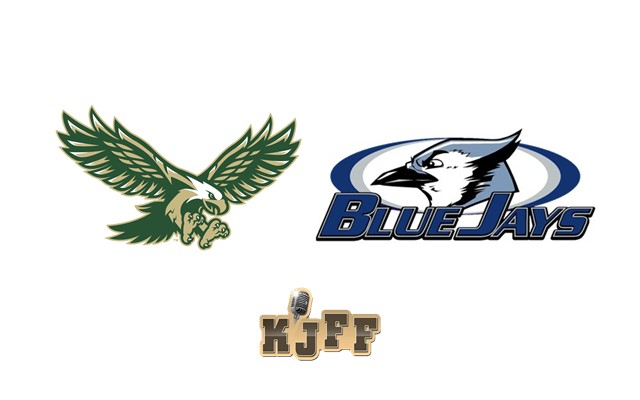 (Festus) The Jefferson Bluejays claimed their first district championship in school history tonight defeating New Madrid County Central 42-20 on Am 1400 KJFF. Both of these offenses had been on a tear in recent weeks and both coaches new defense would be the key to the game. The Eagles won the toss and elected to receive the opening kick. Jefferson stood up tall forcing a punt on the first drive and went right to work. Bluejay quarterback Drew Breeze found Colby Ott deep down the field to open up the scoring.

That was just the beginning of an outstanding night for Colby Ott. He scored two more times in the first half on short yardage runs, putting the Bluejays up 21-6 at half. Ott wasn’t done though and 90 seconds into the third quarter he would strike again.

Ott put on show, earning Applebee’s of Farmington player of the game honors. He ran the ball 16 times for 152 yards and four scores, and added two receptions for 65 yards and a touchdown including this 36 yard run.

Dylan Schnitzler put the finishing touches on the district championship with a 15 yard touchdown run late in the fourth quarter. After the game Ott praised his teammates for his huge night.

Head coach Alex Rouggly said knowing that his team is the district champion is a beautiful thing.

New Madrid County Central finishes the season at 7-5. Jefferson improves to 8-2 and advances to play Duchesne the State Quarterfinals next week.