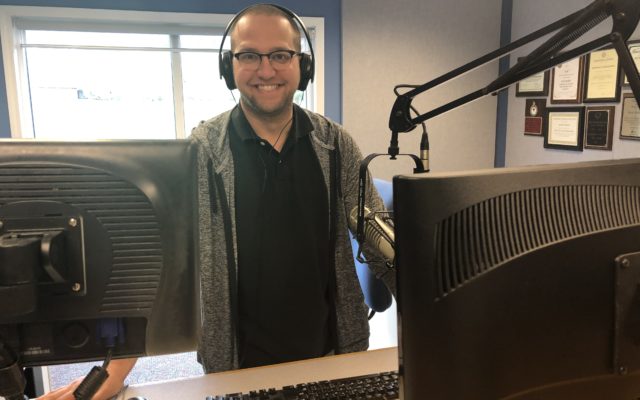 Brandon Pavlina joined the Regional Radio team back in April of 2019 and rapidly worked his way up to becoming the J98 and KREI Sports Director.

He is originally from Dyer, Indiana which is a town in northwest Indiana, an area frequently referred to as “The Region”.

Pavlina has worked in sports broadcasting since graduating from Indiana University in the spring of 2017 with a degree in sports communication.

Out of school he linked up with Regional Radio Sports Network, a sports broadcasting company based out of Mishawaka, Indiana. As a broadcaster with RRSN he had the opportunity to work alongside and learn from Paul Condry and Mike Knezevich, two sports broadcasters with decades of experience and Indiana Sportswriters and Sportscasters Association Hall of Famers.

He then spent the summer in Walla Walla, Washington serving as the play-by-play broadcaster and media relations manager for the summer collegiate baseball team in the West Coast League, the Walla Walla Sweets.

Following his time in Washington, Pavlina returned home to the Hoosier state and began working with the local radio station WJOB as a play-by-play broadcaster calling high school and college games across northwest Indiana.

When he learned about an opening with J98 The Boot in Farmington, Pavlina jumped at the opportunity to join a thriving radio station in the heart of the Show-Me State.

He began as the late-night talent, spending weekdays live on-air from nine until midnight. From there he worked his way up through the ranks to become the station’s sports director.

As a former high school athlete himself, a three-year letter winner in both baseball and football and a two-time baseball state champion with Andrean High School, Pavlina understands how important it is for local media to promote its area’s athletes.

He says he loves the opportunity to cover the tremendous athletes in southeast Missouri and tell their stories for friends and family to see both now and in the future.

For any questions regarding the sports coverage on Regional Radio or if you would like to make a suggestion for a story: