Cancer Society Says Medicaid Expansion in Missouri Would Save Lives 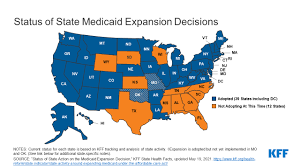 Three women with serious health problems are suing the State after the Republican-controlled state legislature de-funded the expansion right after citizens of the state voted for expansion.

She says delaying Medicaid expansion in Missouri is not good for anyone, especially those who could benefit from it.

Kalmer says the three women who filed the lawsuit are just three of the hundreds of thousands of Missourians in need of access to health care coverage.

Anti-expansion Republicans say the Medicaid expansion ballot measure did not include a funding source in the ballot language, believing the measure is somehow unconstitutional.

They instead chose to put extra funding toward an increase in K through 12 school transportation, adult day care and nursing home care and the hiring of additional public defenders, among other things.