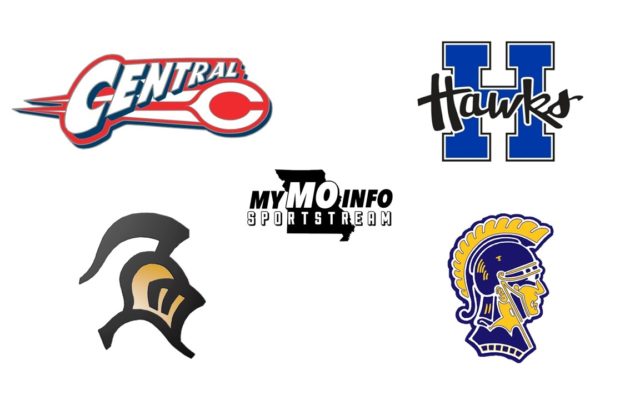 (Park Hills, Mo.) In the first game of the Class 4 District 2 Semifinals on the MyMoInfo SportStream the top seeded Central Rebels defended their home-court against the Farmington Knights winning 55-47.

The first half was non-stop action with the lead switching back and forth.

Each team took turns holding the lead until late in the fourth quarter when the Rebels pulled ahead thanks to a great defensive play by freshman Mason Williams.

Rebels head coach Allen Davis says the Williams steal changed the momentum in the game, leading to the eventual win for the Rebels.

The win improves Central to 20-6 while Farmington finishes the season at 17-11.

In the second game of the semifinals, the Hillsboro Hawks defeated the North County Raiders 66-59.

The Raiders led at halftime by one point 30-29 behind Karter Kekec and his 10 first half points.

The Hawks came on strong in the third quarter, outscoring the Raiders 15 to 11 behind two threes from Logan Smith.

The Hawks lead by 5 going into the fourth quarter and never looked back thanks to some clutch free throws down the stretch from senior Ethan Worley.

Hillsboro is now 22-5 on the year while North County ends their season at 20-8.

The boys Class 4 District 2 Championship is now set as #1 Central will take on #2 Hillsboro coming up on Thursday evening.

We’ll have coverage of the game beginning 10 minutes after the conclusion of the girls championship on 98.5 FM, J98.