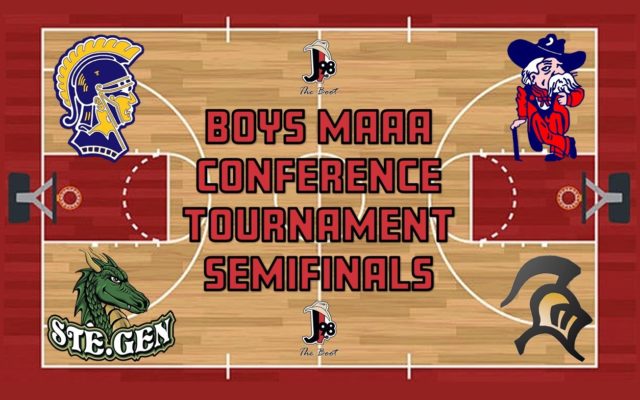 The Farmington Knights faced of against the Central Rebels in the MAAA Semifinals in boys basketball tonight heard on J-98. Central came out strong in the first half hitting 9 three-pointers and took a commanding lead at the half by a score of 41-31. The Knights were unable to comeback in the second half as Central defeated the Knights 69-64.

Head coach Allen Davis gives his thoughts on the game.

The Rebels improve to 17-4 and move on to the championship game tomorrow against North County. The Knights fall to 12-9 and will face Ste. Genevieve for third place in the MAAA tournament.

The Ste. Genevieve Dragons and North County Raiders faced off in the second semi final game tonight on J-98. North County took control in the first quarter, but in the second the Dragons started forcing some turnovers and found themselves up at the half 28-24. Karter Kekec came out of the half on fire and had 16 points in the third quarter to take the lead back for the Raiders. Kekec and the Raiders completed their comeback to defeat the Ste. Genevieve Dragons 64-53.

Karter Kekec is our Applebee’s Player of the game and also, led all scorers with 36 points.

Raiders head coach Jimmy Palmer said he was pleased with his team’s performance in the second half.

The Raiders improve to 16-6 and move on to the Championship game to meet Central. The Dragons fall to 12-10 and will face the Farmington for third place in the MAAA tournament. Coverage of the championship and 3rd place games start at 3:45 with the Flieg’s Equipment Pregame show at 3:45 tomorrow on J-98.