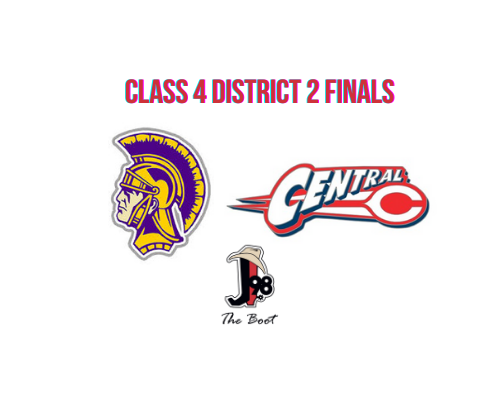 (Ste. Genevieve) The Central Rebels and Potosi Trojans headline the Class 4 District 2 Championships as both the boys and girls basketball teams will be duking it out for a spot in the state tournament.

Our first game of the night is the girls championship. The Rebels come in with a record of 19-5 after defeating Herculaneum 59-35 on Monday night in the semifinal round. Central has beaten Potosi three times already this season, but a fourth victory against the purple-and-gold would lead the Rebels to their 4th straight district championship and their 9th in the last 11 seasons.

Central coach Josh Mapes sees one advantage the Trojans have over his team.

Potosi enters with a record of 17-9 and squeaked by Fredericktown on Tuesday, 29-27. Trojans coach Alli Golden says the tape from the previous games has been useful in preparing for Thursday’s matchup.

Potosi is looking for their first district championship since 2017.

Central’s boys squad also comes in with a record of 19-5 after defeating Herky 73-54 on Saturday. The Rebels are looking for their 3rd straight district championship and their 8th in the last 10 seasons. Central is led by dynamic sophomore Jobe Bryant, who is averaging nearly 24 points per game.

Head Coach Brad Gross says Bryant does a little bit of everything for his squad.

But the 15-11 Potosi Trojans have a dynamic underclassman of their own. Freshman Carter Whitley has broken out and surged their offense, scoring 13 points in a 44-36 upset over Ste. Genevieve in Monday’s semifinals. The purple and gold went 9-of-24 from the free throw line on Monday, but they were still able to take home the W.

In order to capture their first district championship since 2015, head coach Jackson Conaway says his guys will need to knock down the freebies against Central.

The Class 4 District 2 Championship Games will begin with the Fliegs Equipment Pregame Show at 4:45 Thursday afternoon on J98 or streaming online at MyMoInfo.com.