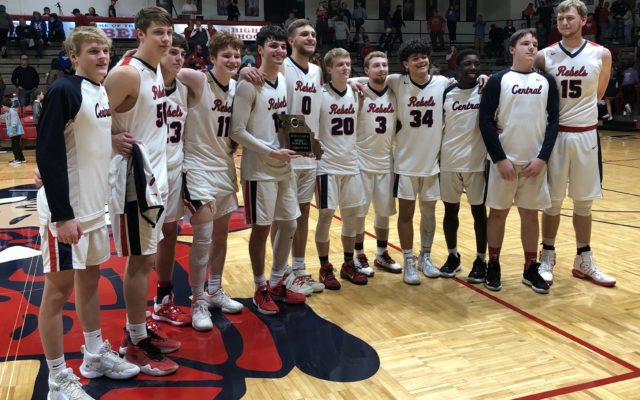 (Park Hills, Mo.) In the Class 4 District 2 boys basketball championship tonight on J98 the #1 Central Rebels knocked off the #2 Hillsboro Hawks by a final score of 62-44.

It was a tightly contested first quarter, then Rebels’ freshman Mason Williams started cooking in the second quarter.

Central tacked on a few more points and went into halftime with a 28-17 lead.

The Rebels were able to pull away in the second half as Applebee’s of Farmington Player of the Game Brent Wagner started lighting it up from deep.

Wagner finished the game with 20 points to lead all scorers.

Central improves to 21-6 on the season while Hillsboro ends the year at 22-6.

The Rebels now head to the State Tournament where they will take on the winner of the Class 4 District 1 Tournament between Cape Notre Dame and Cape Central.

That Sectionals game will take place on Tuesday at the Farmington Civic Center and we’ll have coverage of the game beginning at 7:30 on J98.