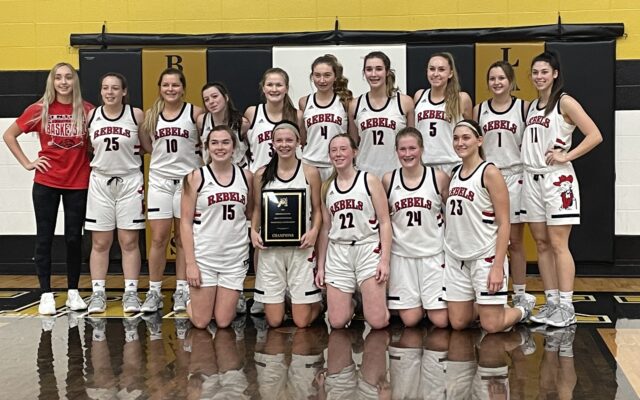 (Fredericktown) It was a showcase of Girls Basketball today on J98 for the final day of the Fredericktown Tournament. First, it was the fifth-place game where Perryville toppled Arcadia Valley 46-37. The Pirates started off hot with some great play from Brooklyn Moll.

The Pirates would go into halftime leading 24-17, but in the third quarter, the Tigers would claw back after drilling big-time threes.

However, Perryville would find a way to close it out in the fourth by playing good defense and nailing free throws. Pirates head coach Angela Fulton says she’S proud of her team for closing it out

The third-place game between Fredericktown and Naylor ended with a Lady Blackcats 43-29 victory over the Lady Eagles. It was a slow first quarter with the score tied at three but Fredericktown freshman P.J. Reutzel came to play in the second quarter.

That wasn’t all the freshman had to offer.

Ruetzel was named the Applebee’s of Farmington Player of the Game finishing with 15 points. Fredericktown senior Kyndal Dodd added ten points to help the Lady Blackcats.

In the Championship game, the Central Rebels route the Potosi Trojans 59-43. The Rebels set the pressure early from the opening tip, scoring six points in less than 40 seconds.

In the second quarter, the sophomore Khloe Dischbein caught fire.

Dischbein was our Applebee’s of Farmington Player of the Game and finished with 28 points, with 18 coming from an explosive first half. Head Coach Josh Mapes says he sees a lot of upside with his younger players.

Central ends the tournament 4-0, Fredericktown at 3-1, Perryville at 1-2, and Arcadia Valley stays winless at 0-3.