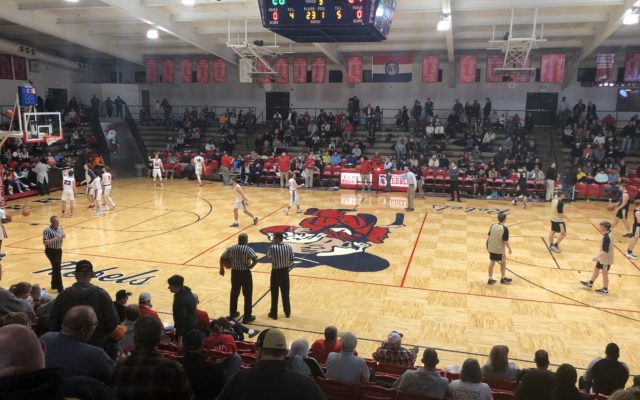 (Park Hills, Mo.) Four quarters wasn’t enough to determine a winner between the Central and Farmington boys basketball teams as the Rebels won in overtime by a final score of 67-60 tonight on J98.

Late in the fourth quarter with Farmington leading by two, it was the Rebels’ Brent Wagner who tied the the game at 52 to send it to extra time.

Then as overtime began, Central’s Breven McMullen started to take over.

With the Rebels leading 65-60 and under a minute remaining in overtime, it was McMullen again with a big time play, but this time, it came on the defensive end.

Central head coach Allen Davis says his team did well playing a free-flowing style in the game but struggled to execute plays.

The win improves the Rebels to 14-4 and 4-0 in MAAA play. They will next take on North County on Saturday in a battle for MAAA Large School supremacy.

The loss drops the Knights to 10-8 and 2-2 in MAAA play. They next travel to Jackson on Friday to take on the Indians, and we’ll have coverage of that game beginning at 7:15 on J98.