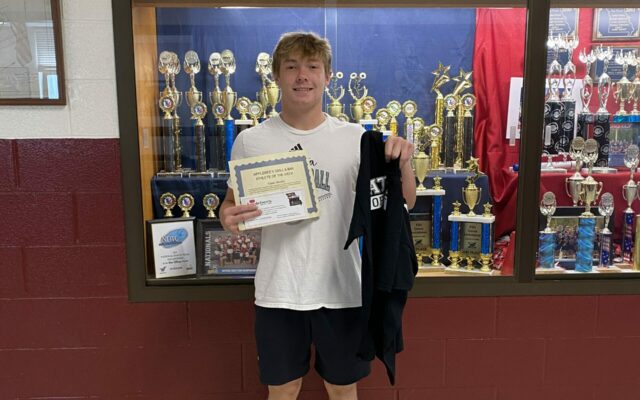 (Park Hills) The Central football program in Park Hills has produced yet another Applebee’s of Farmington Athlete of the Week, this time its junior quarterback Casen Murphy. Murphy didn’t have the busiest game against Potosi last week, only throwing 7 passes and rushing 6 times, but he managed to score 6 total touchdowns and gained 280 all-purpose yards. Murphy says the touchdowns come easy when he has great talent around him.

Murphy spent last year learning behind one of the all-time winningest quarterbacks at Central, Jett Bridges. He says he learned a lot from Jett and it was a smooth transition to becoming the lead signal caller for the Rebels.

Murphy was first-team all-state and our Dream Team Player of the Year for baseball last season, he says some of the skills he has on the diamond translate to the gridiron.

Central has been one of the premiere football programs in the listening area for the last decade. Since 2012, The Rebels have won 7 district championships and have not had a losing season. The Rebels still haven’t missed a step, starting 3-0 this year. Murphy says the reason for Central’s success is in the way they practice.

Central will look to go 4-0 this Friday as the Rebels travel to Cape Girardeau to face the Class 5 Cape Central Tigers. As Applebee’s of Farmington Athlete of the Week, Murphy receives a t-shirt, certificate, and a coupon for a free entree at Applebee’s in Farmington.