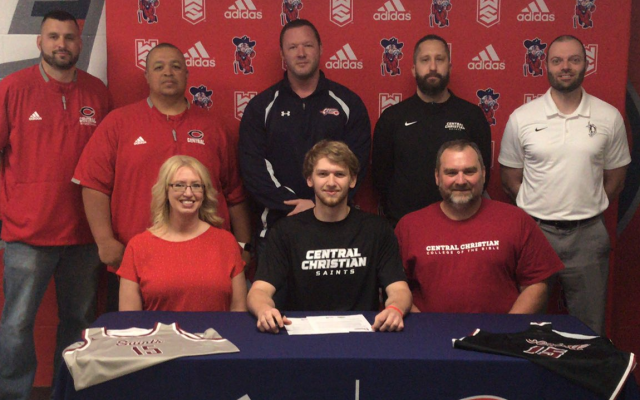 (Park Hills) The big man from the Central boys basketball team is set to take on the big world as he announced recently where he will continue his athletic career.

He says having the opportunity to play hoops while earning an academic scholarship was one he could not pass up.

It is hard to miss Laubinger, as he stands an imposing 6’10” with a build that makes him a force in the painted area.

However, the game of basketball is changing rapidly, with teams playing a fast-paced, guard-oriented game and the traditional big man in some ways being phased out.

Laubinger says he has worked on adjusting his game to match those changes, but he also acknowledges there will always be a role for an enforcer on the hardwood.

Laubinger is still relatively new to the game of basketball.

He only really started playing competitively full-time during his sophomore year at Central, so the ceiling is still somewhat unknown for the physically gifted big man.

However, he says he has gotten off to a great start thanks to the tremendous coaches he has had while playing for the Rebels.

In his senior year with the Central boys basketball team, Laubinger helped lead the Rebels to a (15-11) record and a Class 4 District Championship.

He joins a Central Christian College men’s basketball team that finished the 2020-21 season at (9-16).