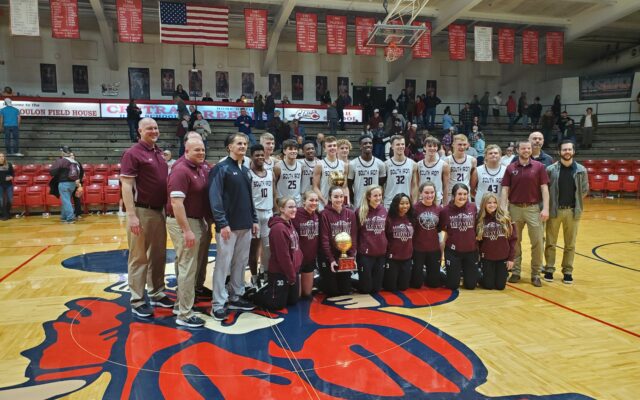 In the Girl’s Championship, The South Iron Lady Panthers scored the first 10 points against Steelville and never looked back en route to their first tournament title 62-48. The Panthers led 30-16 at the half and pushed the lead to as many as 23 in the second half. Junior point guard Madison Ayers led the charge with 21 points and six steals….

The third-ranked team in Class One, South Iron remains undefeated at 9-0. Steelville is ranked 9th in Class Three. They exit the tournament at 9-4.

For the Boys’ Championship, the Panthers defeated the Festus Tigers 78-66 for their 3rd straight championship at the Central Christmas Tournament in Park Hills.

The dynamic duo of Drenin Dinkins (27) and DJ Prater (24) combined for 51 points and Dinkins was able to make this ridiculous shot at the end of the third quarter.

The Central Boys and Girls both took the third-place games at T.J. Foulon Fieldhouse.

The Lady Rebels beat Potosi in the girl’s third-place game 59-46. Potosi took an early six-point lead, but Central surged in front with a 9-0 run. Central led the entire second half by as many as 13. Potosi closed to within two at one point, but never could even it up.

Madison Holmes paced the Rebel attack with 16 points and got some key contributions from some young players.

Central closes the tournament at 8-2. Potosi falls to 7-4.

The boys Rebels squad took down the North County Raiders 60-50.

Both teams came out with great energy, but it was the Rebels that were able to stretch the lead to double digits after a huge second quarter. Central didn’t give up any ground in the second half until the clock showed zeroes. Rebels star guard Jobe Bryant returned to form Friday night and led the way with 27 points.

But Bryant wasn’t done with the highlight material.

Central improves their record to 8-2 and the Raiders lose their second in a row, falling to 5-6.

In the other games