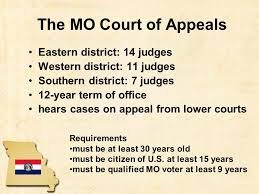 (Jefferson City) George Draper III, Chief Justice of the Supreme Court of Missouri and chair of the Appellate Judicial Commission has submitted to Governor Mike Parson its panel of nominees to fill the vacancy on the Missouri Court of Appeals Eastern District.

One of the nominees is from the listening area.

This vacancy exists due to the September retirement of Judge Lawrence Mooney.

According to a news release, the commission unanimously supports the three nominees.

After nearly 6-and-a-half hours of public interviews, about two hours of deliberations and seven rounds of balloting, the nominees are Michael Gardner, Jeffery McPherson and Michael Noble.

Michael Gardner is the presiding judge of the 32nd Judicial Circuit which covers Bollinger, Perry and Cape Girardeau counties.

He was born in 1979 and resides in Cape Girardeau.

He earned his Bachelor of Arts in Political Science in 2001 and his law degree in 2004 from the University of Missouri-Columbia.

Judge McPherson is from Webster Groves and the other nominee, Judge Noble is from St. Louis.

The governor has 60 days to select one finalist to fill the vacancy.

Should he fail to do so, the Missouri Constitution directs the commission to make the appointment.