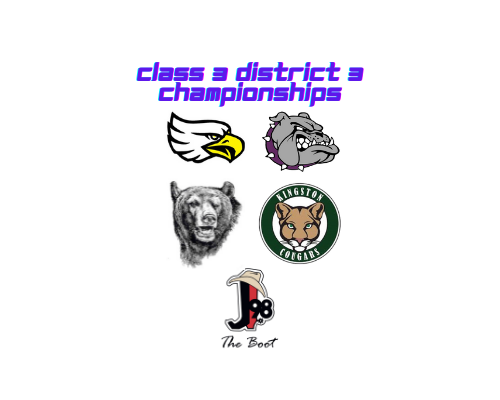 (Leadwood) The Class 3 District 3 boys and girls championships are taking place Saturday at West County High School in Leadwood. You can listen to the broadcasts on J98 The Boot and online at MyMoInfo.com.

We’ll start with the girls championship game between host and top-seed West County and the two-seed Grandview Eagles.

The 21-4 Bulldogs defeated Arcadia Valley by 31 points in the semifinals Monday night. Coach Bobby Simily says his team is locked in on trying to win the district for the second year in a row.

Grandview, meanwhile, is having a bounce-back season after winning just five games last year. The Eagles are 16-7 and have a chance to win their first district title in at least 13 years.

Coach Tim Winkler says a win Thursday would mean a great deal to his team.

The boys championship will have top-seeded Kingston facing off against the two-seed Greenville Bears. The Cougars and the Bears have identical records at 18-7.

For Kingston, this is their first winning season since 2014 but coach Paul Hamilton isn’t taking that number one next to their name for granted.

It’s a bit of a revenge game for Greenville. The Bears were the top seed in last year’s district tournament but got knocked off by a four-seeded Kingston team in the semifinals.

The Fliegs Equipment Pregame Show will begin at 10:45 Saturday morning on J98.