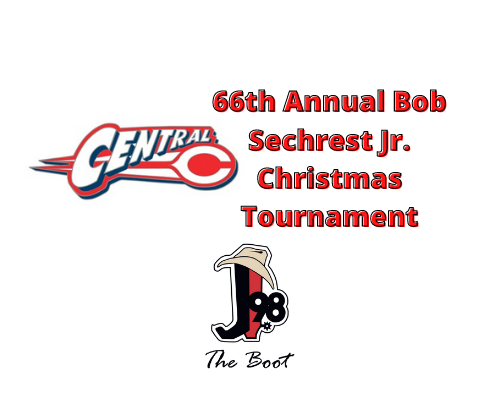 Top ranked South Iron will play 3rd seeded Festus in the boys championship. Panthers coach Dusty Dinkins is ready for the challenge to win their third straight championship at this tournament.

Festus Head Coach Jason Therrell had a lot of praise to give to the Panthers.

The 8-2 Central Rebels take on North County in the 3rd place game. Central coach Brad Gross says rebounding is the key to winning.

Raiders coach Jimmy Palmer says his team won’t back down from a fight.

Steelville and Hillsboro play in the 5th place game at 1:30 p.m.

On the girls side three state ranked teams take the floor. Top seed the Class One’s third ranked team, South Iron takes an undefeated 8-0 mark into the title game with victories over Arcadia Valley and Potosi. Lawrence Grave’s team is looking for their first Christmas championship in school history…

Class Three’s 9th ranked Steelville squad beat the buzzer and the host team in the semis. They are looking forward to a matchup with another great program…

Steelville enters the game at 9-3
We start our coverage with the girls third place game scheduled for a 3:00 tipoff. An improved Potosi team challenges Central. First year head coach Allie Golden says it’s no secret why her team is getting better…

Potosi comes in at 7-3. Central is ranked second in Class Four with a 6-2 record.

Festus and Fredericktown play in the girls consolation final at 10am.

Coverage of the Bob Sechrest Jr. Central Christmas Tournament on J-98 will begin at 2:45 with the Fliegs Equipment Pregame Show.