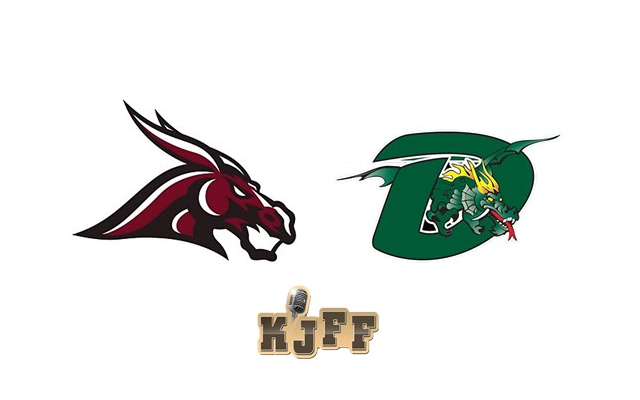 The DeSoto Dragons just couldn’t find ways to finish in a 56-6 loss to the Poplar Bluff Mules Friday night.

DeSoto had 4 drives get inside the opposing 10-yard line, but only produced a pair of field goals in the first half.

The Dragons started the night strong, getting a fourth-and-goal stop on defense and a 75-yard run by senior tailback Dominic Punjani on their first play from scrimmage.

But after failing to cash in, Bradley Hunt came on and hit a 25-yard field goal for the game’s first points.

The Mules got another stop, and junior quarterback Kannon Carr came up with his first touchdown throw of the season.

Carr would come with 2 more touchdown passes before halftime, but the Dragons did put together a solid drive at the end of the first half behind the scrambling of senior quarterback Ethan Reissing.

That set up Hunt to hit another 25-yard field goal heading into the halftime break.

Trailing 25-6, the Dragons started the second half with another one of those productive drives, but they suffered a back-breaking turnover.

From there, Poplar Bluff never looked back.

Carr would throw 2 more TDs, finishing with a touchdown pass on five of his final 6 pass attempts.

But despite the defensive struggles, Dragons head coach Chris Johnson said, even trailing by 3 scores, the pick-six was the deflating moment.

Punjani ran for over 100 yards for the second straight week.

DeSoto falls to 0-2 on the season and will look for their first win of 2020 when they travel to North County next week.