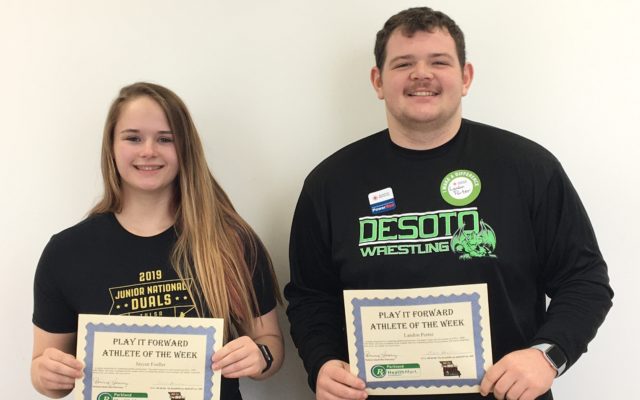 It was a dominant wrestling season for DeSoto’s Jaycee Foeller and Landon Porter.

The Dragon grapplers both went unbeaten this season on the mat and won state championships, and now they are the Parkland Health Mart Pharmacy “Play it Forward” Co-Athlete of the Week.

The junior and senior reflect on how it feels to bring home a title from the state tournament in Columbia.

Foeller wrapped up her second consecutive undefeated season by winning back-to-back state championships in the 166-pound weight class.
She says if she ever gets complacent, she goes back to getting to wrestle with the DeSoto boys team in practice.
After finishing fourth in the state in Class 3 at 285 lbs last season, Porter wrapped his career with a title he desperaetly wanted.
He said his perfect record was always secondary to winning it all.
Porter is committed to continue wrestling collegiately at McKendree University.
As Co-Athlete of the Week, Foeller and Porter each receive a T-shirt and a certificate. Parkland Health Mart Pharmacy will also donate $25 to a charity of their choice.
To hear the full interview with Jaycee Foeller and Landon Porter, click play below.
Connect With Us Listen To Us On