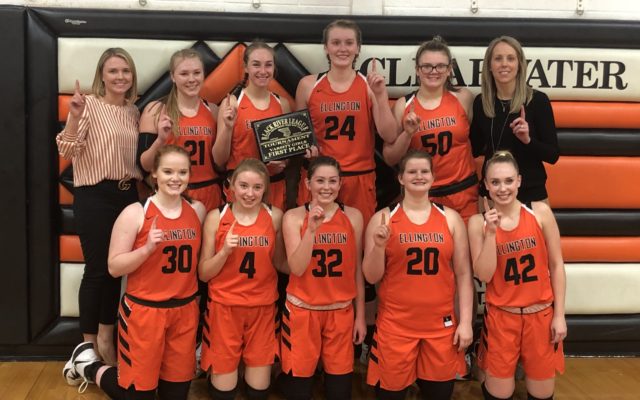 (Piedmont, Mo.) The Black River League Tournament was one for the ages Saturday afternoon as both the girls third place and championship games were decided by just one possession. In the third place game the Lesterville Lady Bearcats trailed for most of the game until the fourth quarter, and then it was Grace Hicks who hit a wild shot to put them on top for good.

The Bearcats went on to win by a final score of 54-51. Head coach Melissa St. Gemme says she’s proud of her team, but specifically her freshman Piper Fitzgerald who finished with 18 points on the day.

The championship game topped the third place game in the Black River League tournament on the girls side as the number one Lady Panthers of South Iron had a nine point halftime advantage, but squandered it in the second half. Ellington crawled all the way back before taking the lead for the final time on this play.

The Lady Whippets held on with that final score of 53-51 and knocked off the top ranked team in the state as they take the title in the Black River League Tournament. Head coach Paula King says her star point guard Kaylee King wasn’t great in the first half, but kept her head up in the second.

The number nine ranked Ellington Lady Whippets improve to 14-3 on the season as they avenge their earlier season loss to the Lady Panthers who fall to 11-4.