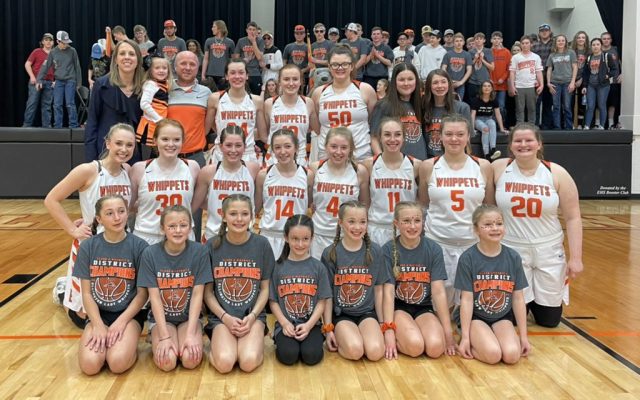 (Ellington) The Ellington girls basketball team is Final Four bound as they took down the Oran Lady Eagles in the Class 2 Quarterfinals 59-51 this afternoon on J98.

It was a slugfest throughout with very little separation between the two teams as every time the Lady Whippets started to pull away, the Lady Eagles would claw right back.

Ellington was clinging to a two-point lead, 42-40 at the start of the fourth quarter.

Then in the final frame, their two standouts sophomore Kaylee King and junior Gretchen Hackworth made some big-time momentum-swinging plays.

Those two were named the Applebee’s of Farmington Players of the Game as King finished with 22 and Hackworth poured in 20.

Oran hung around over the final few minutes, but the Lady Whippets managed to avoid turnovers and knocked down their free throws to hold on for the eight-point win.

Ellington head coach David Burrows says all season long he encouraged his team to set their sights on Springfield, and they got it done.

Ellington improves to (21-5) and now heads to the Class 2 semifinals where they will take on the Blue Eye Lady Bulldogs (24-5) Thursday evening.

We’ll have coverage of that game beginning at 4:45 on Regional Radio.