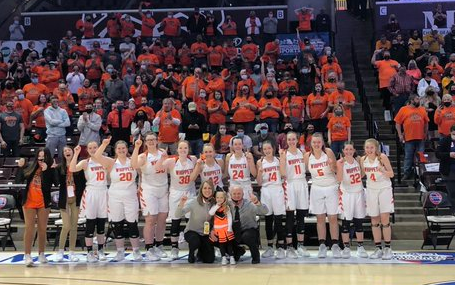 (Ellington) In his first year as the head coach of the Ellington girls basketball team, David Burrows guided the Lady Whippets to the Class 2 State Championship and was named the 2021 Girls Basketball Dream Team Coach of the Year.

He says he appreciates the recognition.

While Burrows carries the title of head coach of the Lady Whippets, there was an equally important member of the coaching staff on the bench this season.

Paula King had previously served as the girls basketball head coach at Ellington before she became the Southern Reynolds County R-2 Superintendent and moved into an assistant role with the team this year.

Burrows says with King’s previous experience coaching this group and expansive knowledge as a veteran on the sidelines, she deserves just as much credit for the team’s success this season.

The upward trajectory has been there for the Lady Whippets as they went from 19 wins to 21 wins to 23 wins over the past three seasons.

However, there was still a Cinderella story feel to the magical run they went on this year as a team that was unranked in the MBCA Class 2 polls virtually all season.

But without a single graduating senior on the team and now with a state championship to their name, the Ellington girls will be on everyone’s radar next year.

Burrows says he knows the secret is out on Lady Whippets basketball, and they are ready for the challenges that brings.

The expectations will be sky high for Ellington girls basketball next season, and there are plenty of reasons to believe they will be knocking on Springfield’s door once again in 2022.

Perhaps the biggest reason according to Burrows is the fact that just a few weeks removed from reaching the mountaintop, his players are already looking for ways to get back on the court and improve.

The Lady Whippets finished the season at (23-5) and brought home the first girls basketball state championship in program history.