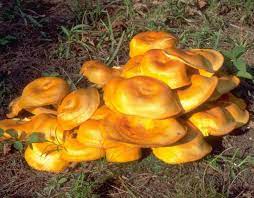 (Ironton) Deer, elk and now bear season get all the major publicity when it comes to fall hunting seasons in Missouri.

However, there is a hunting season underway right now that may peak your interest and you don’t even need a tag.

Iron County Conservation Agent Sarah Ettinger-Dietzel says when you go on this hunt, you don’t even need a gun.

Ettinger-Dietzel says be very certain before you decide to consume fall mushrooms found in the Missouri outdoors.

According to the Missouri Department of Conservation, there are at least 12 edible mushrooms that can be found in the state in the fall.

There are several fall mushrooms that are inedible and at least one that is deadly if eaten.

The conservation department describes it as a white mushroom with a flaring to ragged ring on the stalk and has a large, saclike cup about it’s base.

In fact, they say it’s best to not even touch this particular mushroom.