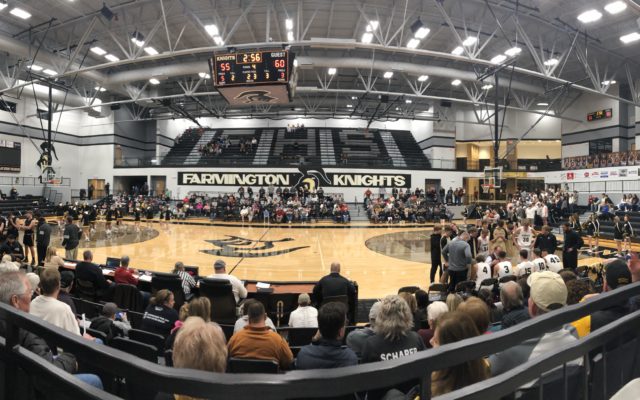 (Farmington, Mo.) The Farmington Knights boys basketball team lost a thriller at home to the Kennett Indians tonight by a final score of 64-63.

Farmington trailed for most of the first half before Brant Gray was able to find the range from deep in the second quarter.

That lead was short-lived however as Kennett rattled off a 9-1 run to end the frame, giving the Indians a 33-26 lead at halftime.

Farmington was able to put together a run of their own to begin the second half as they pulled it back to even thanks to red-hot shooting from Applebee’s of Farmington Player of the Game Isaiah Robinson.

Robinson finished the game with 26 points. Then in the waning moments of the game and the Knights chasing two points, it was sophomore J.P. Ruble who played hero for Farmington.

Despite the Knights gaining the late lead, Kennett was able to respond by drawing a foul with less than 10 seconds remaining in the game, and Jackson Henfling dropped in both free throws to put the Indians back on top by the final score of 64-63.

Farmington head coach Terry Noble says there were a handful of plays his team could have made to change the outcome, not just the foul that sent Kennett to the free throw line. Even still, he was pleased with the effort of his group to battle through adversity.

With the loss the Knights fall to 5-5 on the season while Kennett improves to 10-2.

Farmington will have some time off before they return to action next Friday to hose the Ste. Genevieve Dragons. We will have coverage of that game beginning at 7:15 on AM 800 KREI.