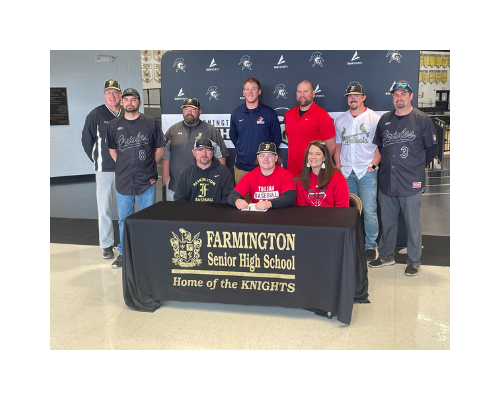 (Farmington) Thursday was a special day for Farmington senior Justin Mattingly in part because he signed a National Letter of Intent to play baseball at NAIA Hannibal-LaGrange University. Mattingly tells us how it felt to put pen to paper.

Mattingly will be joining his brother, Jaysen, at Hannibal-LaGrange in the fall.

Hannibal-LaGrange pitching coach Charles Rapp was on hand for the signing and gave his thoughts on the new Trojan signee.

Mattingly will eventually get to that level but for now he’s in his final season with Farmington. He pitches for the Knights but he’s also trying to help the team in other ways.

Last Thursday, in a 5-1 Senior Night win over Fredericktown, Mattingly threw a complete game with 8 strikeouts and was our Applebee’s of Farmington Player of the Game.