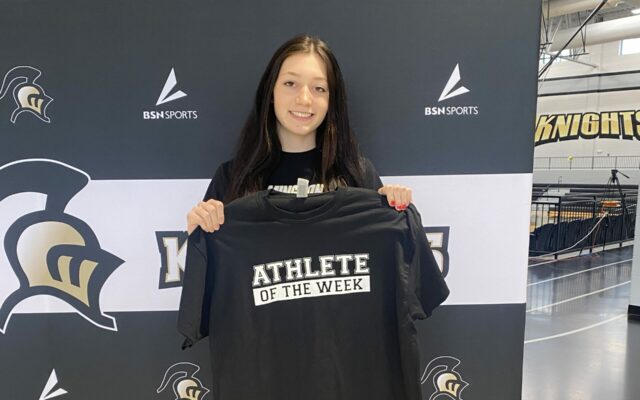 (Farmington) Farmington Junior Jade Roth is the Applebee’s of Farmington Athlete of the Week after a phenomenal showing in the MAAA tournament. The Knightettes defeated Arcadia Valley, West County, and North County en route to their first conference tournament title since 2010. Roth says winning the conference is a result of hard work paying off.

During Farmington’s run to win the MAAA Conference Tournament, Roth finished with a total of 40 points, 15 rebounds, 13 steals and 6 blocked shots. While the 6′ tall junior has a dominant presence down on the block, it wasn’t something she always had.

She describes what goes through her mind whenever she gets a touch.

Roth and the Knightettes learned that they will be the number 1 seed in the Class 5 District 1 Tournament, she says they are confident and excited heading into post-season play.

Farmington plays the winner of Windsor and Desoto in the Class 5 District 1 tournament Monday, February 28th. As Athlete of the Week, Jade Roth receives a T-shirt, a certificate and a coupon for a free entree at Applebee’s in Farmington.