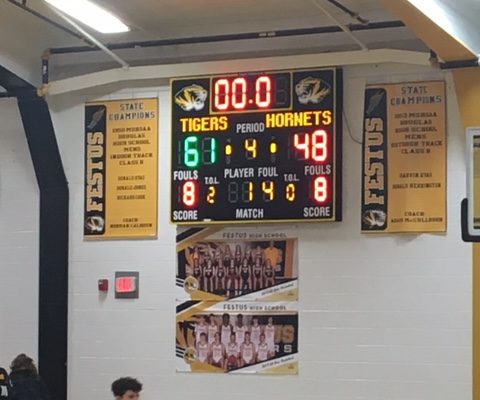 (FESTUS) After a packed house tonight at Festus High School witnessed the first celebration and honoring of the old Douglass High School and its alumni, the fans were treated to a 61-48 Tiger victory over the Crystal City Hornets on KJFF.

The highlight of the night for the Hornets came in the 2nd quarter with the team down 24-17.

Crystal City went into the break down 26-20. In the 3rd quarter, Festus’s rebounding and defense continued to kill any Crystal City momentum as a quick series of plays helped the Tigers pull away.

Tiger head coach Jason Therrell addresses Branch and the swagger he brings to the table.

As for a comment on the honoring of Douglass, here is what Coach Therrell had to say.

Crystal City head coach Lee Richardson spoke about the neat experience for Tullock and his family when he was mentioned in the presentation.

The win for the Festus Tigers improves their record to 6-8 this season. They host DeSoto on Friday at 7. The loss for the Hornets drops them to 4-9. They host Bismarck tomorrow night at 6.