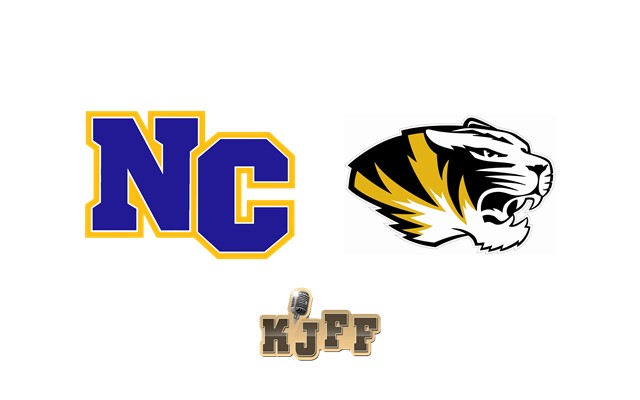 (Festus) It was a wild and wacky road, but the Festus Tigers are the MAFC Red Division champions.

Festus roared back to knock off North County 39-35 Friday night on KJFF to stay unbeaten, and it was not easy.

It seemed like it might be after the Tigers blocked a Raider field goal and subsequently marched right down the field for a score.

But North County immediately responded on the ensuing kickoff.

Festus was undeterred, fielding a short Raider kick and taking advantage of the short field with another touchdown toss for junior quarterback Cole Rickermann.

But North County was ready with a response on its next drive courtesy of senior star Karter Kekec.

The Raiders fell on a Festus fumble and got the lead after another long pass to Kekec set up Jobe Smith’s second TD.

Already leading by a score, North County started to flex its muscle on defense, turning another takeaway into points.

North County took a 28-14 lead after a quarter of play, but they started to sputter courtesy of turnovers and a whopping 150 yards in penalties.

Festus was able to cut into the margin early in the second quarter.

But the Tigers suffered the same problems as the Raiders, committing 5 total turnovers in the game and getting flagged 12 times.

Festus found itself down 28-21 until the opening moments of the fourth quarter, when senior Cole Wagner stepped over from linebacker to play some offense and find the end zone.

The Tigers would miss the tying extra point, and junior quarterback Nolan Reed tried to give North County a much-needed spark.

Down 35-27 with less than 5 minutes to go, Festus simply shrugged its shoulders and said, “Game on.”

Rickermann connected with Wagner for the first big strike.

Even when the tying 2-point conversion failed, Festus got the stop on defense and gave the ball back to Rickermann, who made magic happen facing 3rd down on the final drive.

Rickermann would seal the deal with the go-ahead TD pass, his fourth of the game.

Rickermann finished with 320 yards passing and shared Applebee’s Player of the Game honors with Wagner, who had 85 yards from scrimmage and 2 touchdowns on offense to go with an interception.

Tigers head coach A.J. Ofodile says you can’t coach the kind of heart his team has.

Festus improves to 6-0 and wins the league title outright for the first time since 2014.

The Tigers are on the road at Pacific next week, while North County will look to bounce back from falling to 3-3 when they host Windsor for homecoming on Friday.