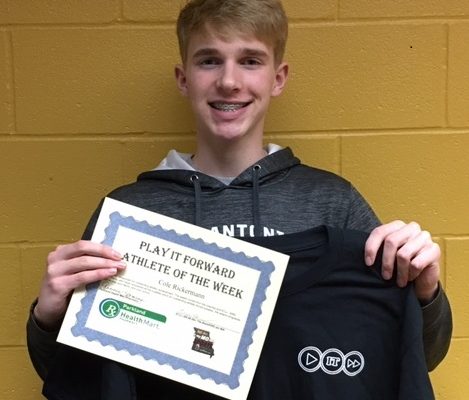 Rickermann dropped in 37 in an 87-68 victory over DeSoto on January 24th. Prior to that, Rickermann scored 17 points in a win against Crystal City on Douglass High School Night at Festus.

Rickermann responded to the notion that he thought it was possible during warm-ups that he would score 37 in the game.

Rickermann added that it was a great feeling to score 37 but even more so because the Tigers got to celebrate a victory. Rickermann also commented on the experience during Douglass High School Night when he scored 17 in that game against Crystal City.

To go along with scoring 54 points in 2 games last week, Rickermann had 16 rebounds, 7 assists, 2 steals, and a block. Cole Rickermann received a t-shirt and a certificate for being Athlete of the Week and also chose the Jefferson County Backstoppers non-profit for his Parkland Health Mart Pharmacy donation of $25.