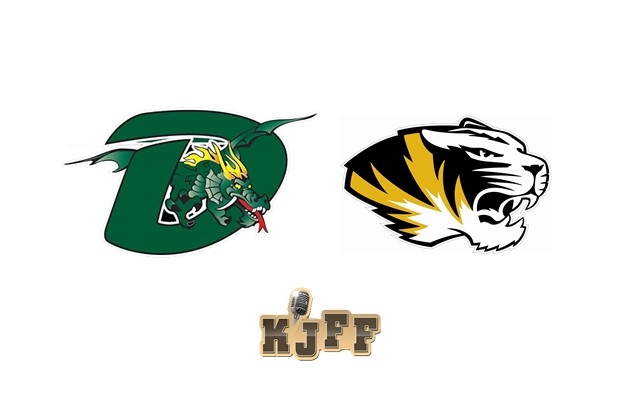 (Festus) The Festus Tigers were able to eventually shrug off some self-inflicted wounds and knock off the DeSoto Dragons 36-13 in Jefferson County Friday Night Football on KJFF.

The game was a scoreless tie midway through the second quarter, with DeSoto dominating time of possession and riding seniors Ethan Reissing and Dominic Punjani in the run game.

But when the Tigers blocked a Dragon field goal attempt, they used big plays on the ensuing drive to finally break through.

Only up a score at the break, Festus roared to life at the start of the second half, using a long kickoff return by Martin and another long run by Anderson to score again.

After another long DeSoto drive ended in a failed 4th-down conversion, the Tigers finally hit a big play in the passing game.

Trailing 22-0, The Dragons finally found a way to finish a drive as the fourth quarter began thanks to their passing game.

But Festus had an immediate response.

Reissing would not quit, making a highlight-reel play.

But despite the Dragons’ efforts to get within 16, Anderson would ice the win on the ensuing possession with the Serenity Hospice Care Play of the Game.

Anderson finished with 248 yards on the ground and was named Applebee’s Player of the Game.

Punjani piled up 108 yards on 25 carries for DeSoto but was knocked out of the game with a head injury that forced medical personnel to bring him off the field on a gurney and take him to an area hospital.

Even despite a loss, Johnson said his team showed him more fire than they have all season.

DeSoto falls to 0-4 and will look for its first win against Windsor on Friday.

Despite the win and some more gaudy offensive numbers, Festus did often get in its own way, committing over 100 yards of penalties and fumbling away the game’s only turnover.

Tigers head coach A.J. Ofodile said his team has to a better job of zeroing in on each play and each opponent.

Festus improves to 4-0 on the season.

The Tigers will travel face Hillsboro with first place in the MAFC Red Division on the line next week.