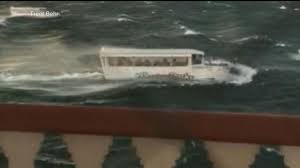 (Branson) The owner of a duck boat that sank in 2018 near Branson has settled its final pending lawsuit in the deadly event.

The settlement is between Ripley Entertainment and the family of 68-year-old Rosemarie Hamann of the St. Louis area.

17 people were killed in the sinking on Table Rock Lake after a fast-moving storm swept in and caused 70 miles per hour winds and tall waves.

The captain of the World War Two tourist boat was indicted in 2018 on 17 counts, including alleged misconduct and negligence.

Last year, Ride the Ducks Branson’s general manager and operations supervisor were charged with 17 felony counts of misconduct and neglect and 13 misdemeanor accounts.