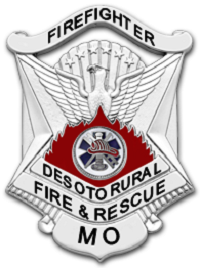 According to De Soto Rural fire Chief Tom Fitzgerald, the call came in around 1:30 that morning.

Chief Fitzgerald adds due to the weather, fighting the fire was a bit of a challenge.

Unfortunately, Chief Fitzgerald says there was about a dozen chickens and a couple of cats inside the barn when the fire broke out.

The cause of the fire is not considered to be suspicious.