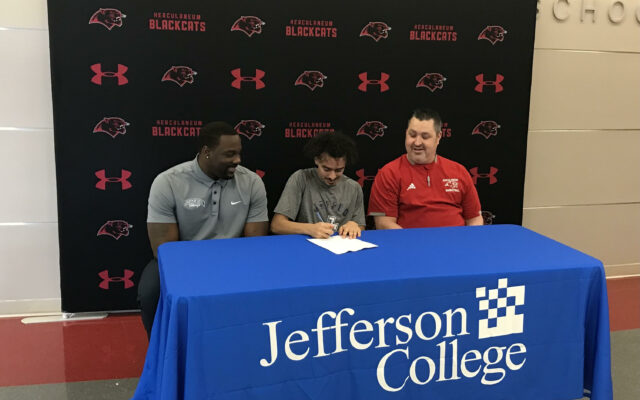 (HERCULANEUM)    Herculaneum Blackcat senior point guard Gabe Watkins will play basketball next season for the Jefferson College Vikings. Watkins made it official at 12 noon today (Friday) in a national letter of intent signing ceremony at Herculaneum High School among family, friends and Blackcat teammates. He is the first local player signed by Jeffco Head Coach C.B. Walker. Jefferson College is reviving its men’s basketball program after it was eliminated in 1987 due to budget restrictions. Walker is confident that Watkins will be an asset to the Vikings.

Walker says he wants to fill a roster of 15 players and he has been busy in the recruiting process.

Herculaneum Coach Jason Jarvis says he is happy for Gabe.

Jarvis believes Watkins will be a good fit for the Vikings.

Watkins is glad he will be playing in his home community at Jefferson College.