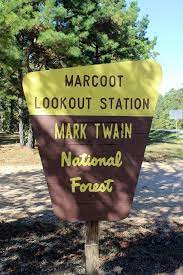 (Bunker) Mark Twain National Forest officials hope someone comes forward to identify those captured on video and photos, who are suspected of stealing from the Marcoot Lookout Tower in Reynolds County.

A news release from the forest service says the theft happened last year when the thieves removed a historic instrument that was still being used by forest officials.

It’s an Osborne Fire Finder that assists forest fire lookouts in pinpointing the exact location of smoke cross-referenced with a map.

The forest services’ Twitter page says this historic instrument has been recovered thanks to a citizens’ tip.

To see the video and photo of the thieves, go to the Mark Twain National Forest Services’ Facebook page.

The Marcoot Lookout Tower is just off Highway 72, about 11 miles north-northwest of Bunker.

It’s 110 foot tall and was built in 1936 by a crew from the Civilian Conservation Corps.