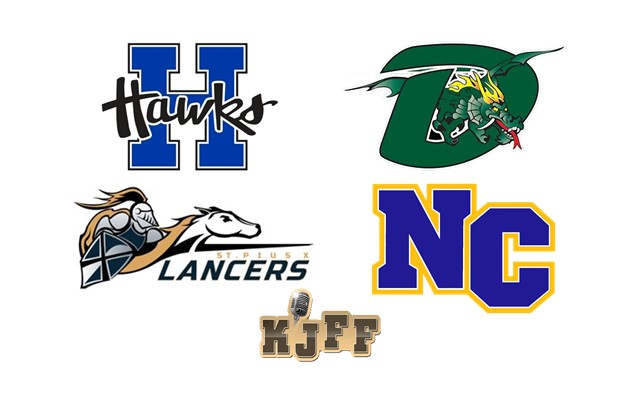 (Hillsboro) The Hillsboro Hawks and St. Pius Lancers have punched their ticket to a championship dance with victories in the Class 4 District 2 volleyball semifinals Monday night on KJFF.

Hillsboro started the night with a win in straight sets over the DeSoto Dragons.

The Hawks rolled in the first set and won 25-8 behind their outstanding group of veteran hitters.

Sophia Marchetti added a pair of aces to 4 kills and was our Applebee’s of Farmington Player of the Game.

Hawks head coach Erin Boss says that kind of contribution from players who don’t normally serve as well is a big boost.

In the second semifinal, St. Pius took the first set from North County 25-16, but the Raiders bounced back and won the second set 28-26.

Needing to find their rhythm, the Lancers turned to all-state outside hitter Kennedy Lane.

Lane finished with 22 kills and 2 aces on her way to Applebee’s of Farmington Player of the Game honors.

Lancers head coach Shannon Leftridge says it was what her hitters did on defense that ultimately put them over the top.

The Hawks and Lancers will meet in the Class 4 District 2 championship match Wednesday night, with coverage beginning at 5:45 on AM 1400 KJFF.

To hear the full semifinal broadcasts again, click play below on either file.