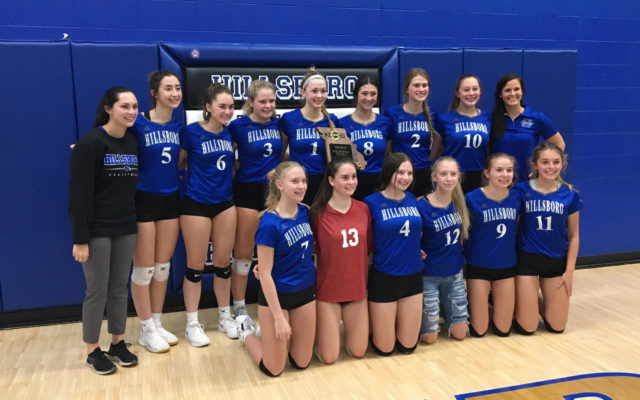 (Hillsboro) For the first time in over 2 decades, Hillsboro Hawks volleyball is a district champion.

Hillsboro knocked off the St. Pius Lancers in four sets to win the Class 4 District 2 championship Wednesday night on KJFF.

Even when Lewis wasn’t making her best play, it still worked out.

Lewis finished with 5 kills, 6 assists and 3 blocks and was named Applebee’s Player of the Game.

The senior described the moment she finally won a district title.

Having now won 97 matches since she took over as Hawks head coach, Erin Boss said it didn’t matter that her team kept coming up short in past postseasons.

Hillsboro improves to 16-6 and will face Nerinx Hall in the Class 4 state sectionals Saturday afternoon at Rockwood Summit High School.