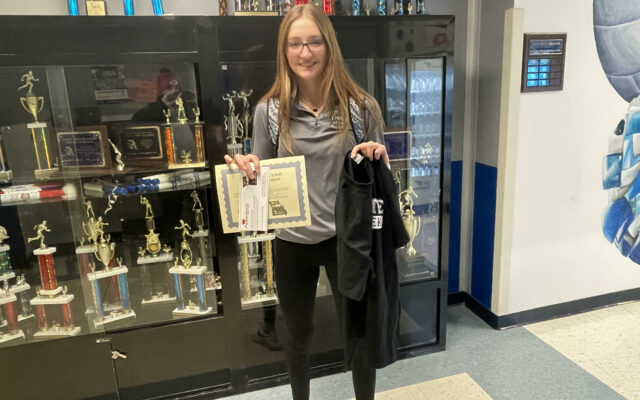 (Hillsboro) In a girls’ basketball season of breakout underclassmen stars in Jefferson County, Kaylee Hilton is working her way to the front of the class for the Hillsboro Hawks.

The nearly 6-foot-tall sophomore forward is one of the most versatile players in the JCAA Large-School Division.

A pair of wins last week that made her the Applebee’s of Farmington Athlete of the Week showed why.

After putting up a whopping 18 points, 21 rebounds and 7 blocked shots in a victory over the Jefferson Blue Jays, Hilton followed it up 4 days later by posting 11 points, 19 boards and 7 blocks to help knock off the DeSoto Dragons.

But she says, in the heat of the moment, she’s just trying to make as many plays as possible.

Hilton’s big week is part of a tremendous season.

The sophomore is averaging 13 points, 12 rebounds and 2 blocks per game.

She’s helped Hillsboro get to 7-9 on the season, but she’s got her sights set higher for herself and the team.

And Hilton is quick to point out how her fellow Hawks set her up for success.

Hilton will look to lead the Hawks to a third straight win when they face the Fox Warriors Wednesday in the Hillsboro Invitational.

As Athlete of the Week, Hilton receives a T-shirt, a certificate and a coupon good for one free entree at Applebee’s in Farmington.