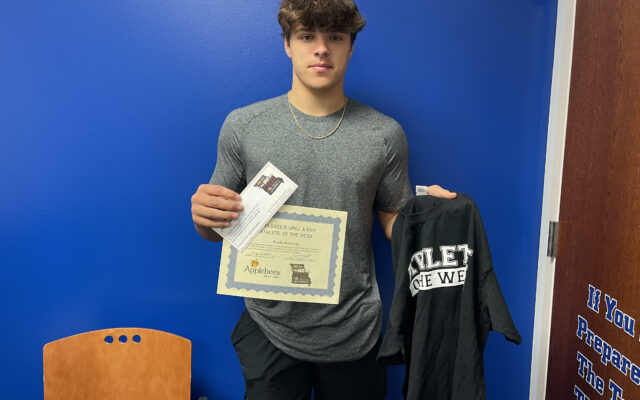 (Hillsboro) Austin Romaine is putting together one of the best football careers that the Hillsboro Hawks have ever seen.

Near the end of his junior season, Romaine has already over 2,400 yards from scrimmage and 170 tackles to his credit.

But he may have saved his best for this past Friday.

The Applebee’s of Farmington Athlete of the Week rushed for a game-high 232 yards in Hillsboro’s 13-7 win over the Festus Tigers in the district semifinals.

But he also owned the game on defense, with a game-high 11 tackles, 4 sacks and an interception.

The win was part of a week where Romaine was named the MAFC Red Division MVP as well as the conference’s defensive player of the year.

But while he’s flattered by the accolades, Romaine is always focused on the next challenge.

The next challenge on the field is the North County Raiders, who stand between Hillsboro and its first district championship since 2017.

Since it was the Raiders who came to Hillsboro and beat the Hawks last season in the playoffs, this one means a lot to Romaine.

You can hear it with coverage starting at 6 o’clock on AM 1400 KJFF.

As Athlete of the Week, Romaine receives a T-shirt, a certificate and a coupon good for one free entree at Applebee’s in Farmington.