Indictment for Man Accused of Car Jacking in Jefferson County 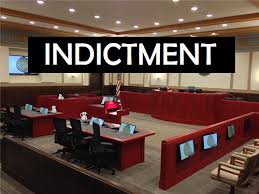 (St. Louis) A federal grand jury has indicted Brandon Vandoren for carjacking causing serious bodily injury and for being a felon in possession of a firearm.

The 23-year-old is a resident of Mehlville.

The grand jury also indicted Matthew Carver for being a felon in possession of a firearm.

Court documents say on May 20th of this year, Vandoren and Carver stole a vehicle at the MotoMart in Jefferson County.

Vandoren got into the victim’s vehicle while Carver remained in the vehicle he and Vandoren arrived in at the MotoMart.

As Vandoren and Carver began to drive away, the victim left from inside the MotoMart and chased the defendants on foot.

Vandoren then ran over the victim, nearly killing him. Both Vandoren and Carver left the scene, leading police officers on a high-speed chase.

Police arrested Vandoren the next day in a hotel room and found him with a firearm and narcotics.

Facebook LIVE videos from earlier in the day of the carjacking show Vandoren and Carver each flashing what appears to be the same firearm discovered during Vandoren’s subsequent arrest.

Vandoren faces a maximum term of 25 years in prison if convicted of carjacking resulting in serious bodily injury.

Both Vandoren and Carver face a maximum term of 10 years in prison if convicted.